Bhutan, India’s landlocked neighbor on the north east is slowly and cautiously edging its way into modern life. It’s normal to see sign boards in front of public offices and monasteries that all Bhutanese citizens be dressed in their national attire in order to enter. An office worker in Thimphu on his way back home will make a quick stop at a roadside temple and hug and gracefully rotate the prayer wheels a few times. The streets are clean, there are no power cuts (they export hydro electric power after all) and chilies are eaten as a vegetable. The king and queen make a fairy-tale, handsome couple and are much loved and the cities are surrounded by the lush and verdant mountains of the lower Eastern Himalayas and no one honks or yells! The dazzling monasteries perched in exotic locations will leave you feeling awestruck. 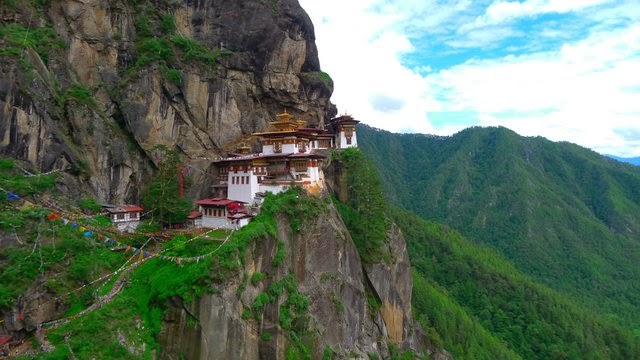 Geographically, the bordering Indian state of Sikkim is just as beautiful with vistas of the majestic snow capped Kanchendzonga, the differences between India and Bhutan are immediately evident just as soon as we cross the border at Jaigaon – Phuentsholing. Due to India’s good relations with Bhutan and being their primary trade partner, Indians do not need a visa or prohibitive tourism fees to enter and visit Bhutan, while the rest of the world has to pay the steep fee of $280 per day to visit as a tourist. An opportunity to experience Bhutanese culture and lifestyle before it full and well throws open its doors to tourists around the world makes Bhutan a must-see for the Indian traveler.

While Bhutan is a small nation, travelers should be aware of its incredibly mountainous landscape. There are only two or three airports in the whole country. It takes a day by land to go from Thimphu to Central Bhutan; so if you have just a week, its best to limit travel to Western Bhutan. Western Bhutan has a lot to see – Thimphu, Paro, Punakha and the Jomolhari trek for those interested. Central Bhutan is well known for the Bumthang valleys, a collection of 5 valleys well known for their scenic beauty and slow paced lifestyle. 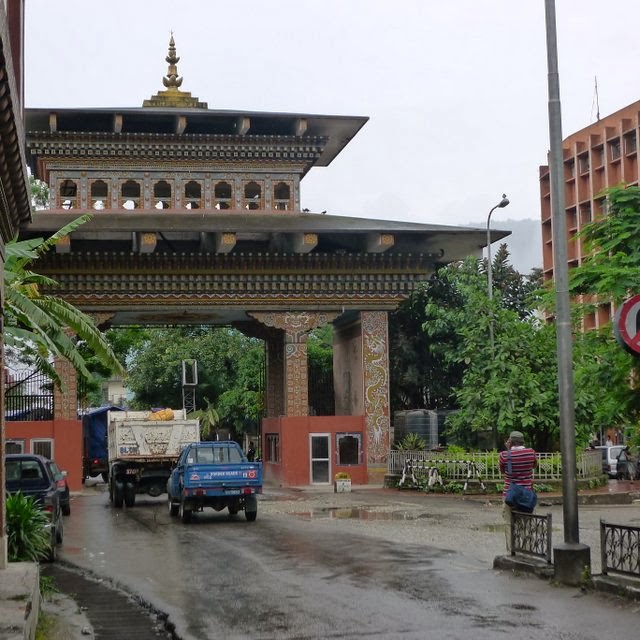 Indian citizens do not need a visa, but do need an entry permit which is available at the India-Bhutan border town of Phuentsholing or at the airport in Paro for those who fly in. There are many ways to approach the border crossing:

The India-Bhutan border gate separates Jaigaon and Phuentsholing.  Downtown Jaigaon has at least 3 to 4 decent hotels, some with air conditioning. We stayed at the newly opened Ibis hotel, which has sparkling clean A/C rooms for Rs.1800 and a restaurant that serves up very tasty food. Hotel Devi and Prasant nearby are good choices too, though a/c is not available everywhere. Check before you check in.

It’s not very easy to find a bus from Siliguri to Jaigaon. You have to go to the bus terminus to get a WB bus to Jaigaon or find the Bhutan Transport Corp bus (BTC) that leaves at 12 and 2 in the afternoon. From ‘Siliguri Junction’, the BTC buses are a 10 minute walk away, and most traffic cops know the way. Seats fill up very quickly and are cramped. The BTC buses go all the way unto Phuentsholing. You do NOT need a permit to stay overnight in P’ling. Crash for the night and get early to the permit counter to apply for yours. En route from Siliguri to the border, all buses stop at Hotel Bhutia, which has excellent veg momos. Freshen up here, as it gets really hot and stuffy.

Entry permit office is located very close to the India-Bhutan gate. Ask the guards at the gate and they will point you. The gate is only for vehicular traffic. All pedestrians will be directed to a pedestrian entrance which marks the border between the two countries. Carry two passport size photos, copies of your Indian passport or Voter ID card. You will be photographed and the permit will be issued in as little as 10 minutes if there is no traffic. No one will check your permit until you leave P’ling and there is a checkpoint outside town. Permit is valid for 7 days and can be extended up to your date of departure in Thimphu’s immigration office. For example, if the permit is valid up to the 22nd, but you leave on the 24th, you can get it extended up to 24th immediately…its not a seven day extension. Make sure you add a day or two in case plans change. 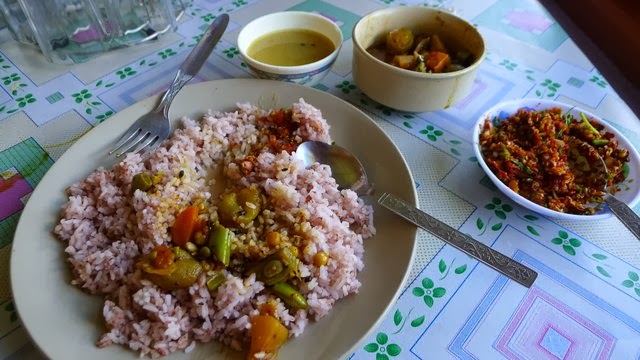 There are public buses between cities, but for most other tourism, taxi is the main way to go. All cities/towns have shared taxis, which are considerably cheaper than renting one on your own. Buses from Phuentsholing to Thimphu fill up very quickly. Its best to buy the ticket the earlier day and leave soon after obtaining the entry permit. Shared taxis are everywhere, but they are not the most comfortable as they will only leave if they are full. Only Thimphu has public transport within the city. For tourists it will be efficient to hire a taxi for the day for sightseeing. You can negotiate with any taxi for the day or go through your hotel. 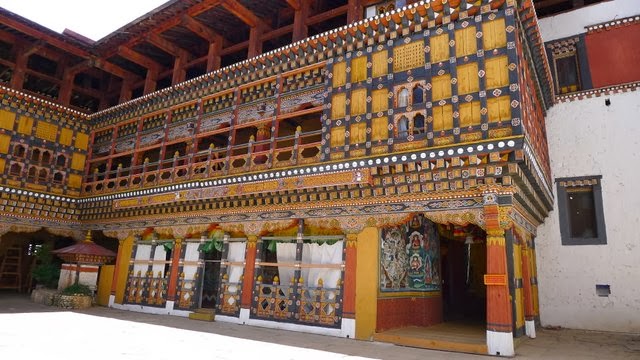 Bhutanese people eat a dish called ema datsi in copious amounts. This is a dish containing chilies and cheese. You can also find Potato + cheese and mushroom + Cheese combos. Obviously not vegan, but vegans can survive very well here. All lunch meals include rice, dal and some side (mixed veg curry or meat) along with a sauce containing chilies. Indian food is widely available, so are snacks from India. Many nice restaurants have veg momos. Its very normal for a meal for two to run unto 400 rupees, even in a small restaurant. We may have paid tourist prices!

Dzongs usually close at 5 pm, as they are administrative offices just as much as they are monasteries. Wear full pants and shirts that are not sleeveless. Guides recommend full sleeve, but Dzong security at Punakha told me half sleeve is okay, though sleeveless is not okay. Carrying a thin jacket helps. Photography is not allowed in any of the temples, but the courtyard should be okay. Taktsang Monastery in Paro is stricter, as they ask you to leave your bag outside.

Really depends on the time of the year. In June, we were supposed to see a lot of heavy rain, but we rarely saw them. Still, we are glad we packed our rain coats and a light jacket. Thats all we really needed. Punakha and Phuentsholing are hot! Thimphu and Paro are pleasant in June. I didn’t use any of my winter clothing, so I should have packed thin layers and one jacket and a scarf (instead of the two I took). Winter is supposed to be very cold, but really beautiful.

Easily available in the June off-season. I highly recommend all the hotels we stayed in.